Make sure you subscribe in the newsletter box found at the bottom of the homepage.
 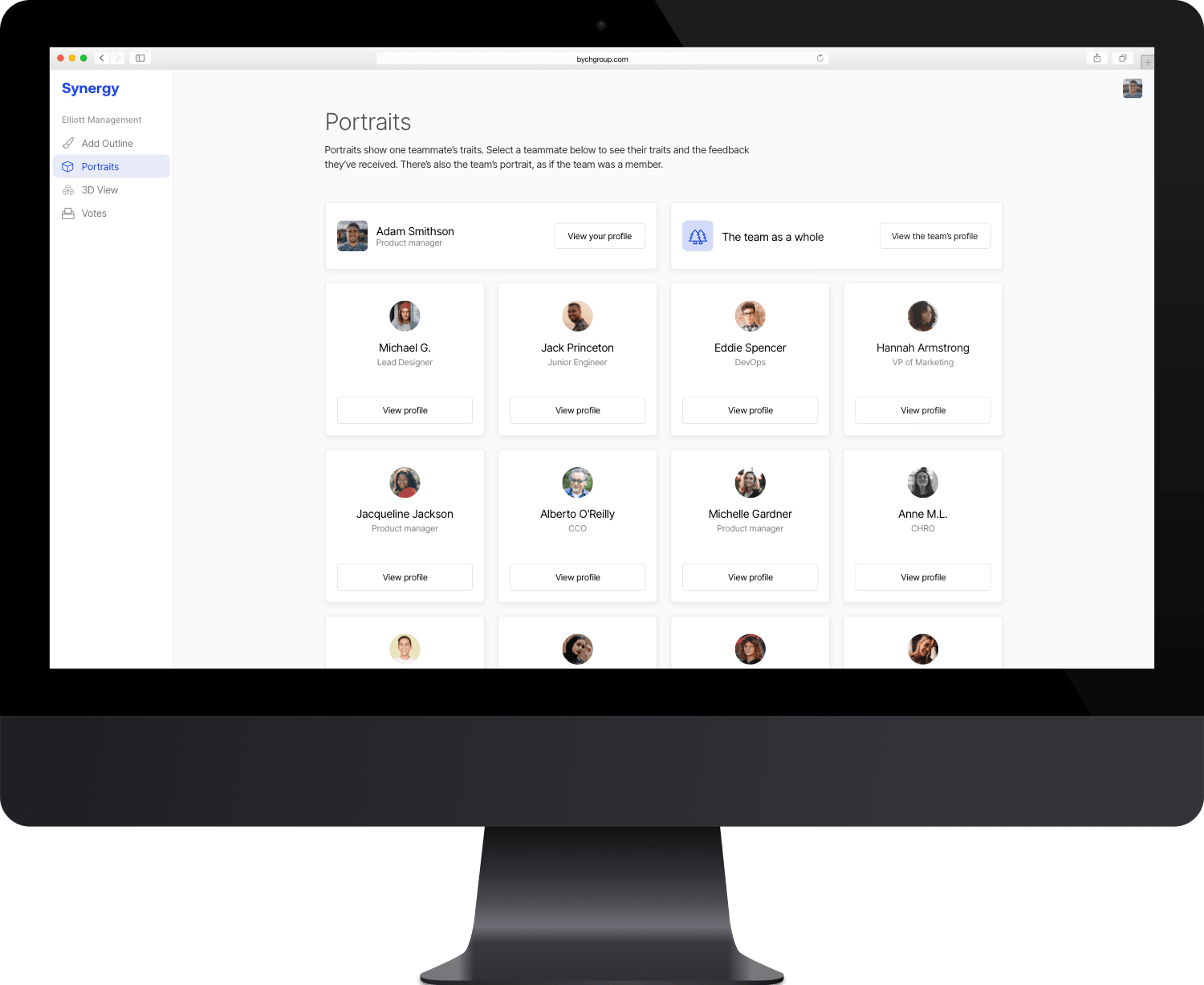 Starting to use Synergy is as easy as it gets
1
Sign up
Tell us your name and the name of your company. Add a profile picture. Then you're good to go!
2
add people
We don't charge for extra seats, so add as many people as you want. We suggest adding your whole team on Synergy.
3
START USING SYNERGY
Every member has now access to the following tools we're walking you through below!
Once you're started, here's how Synergy works
1
It all starts with attributes
With Synergy, every teammate grades each other based on attributes. These are common attributes that matter for team members, such as: creativity, open-mindedness, vision etc.

It's simple: select the teammate, select the attribute and rate them.

Once you've rated someone, you've just created an outline to their portrait! 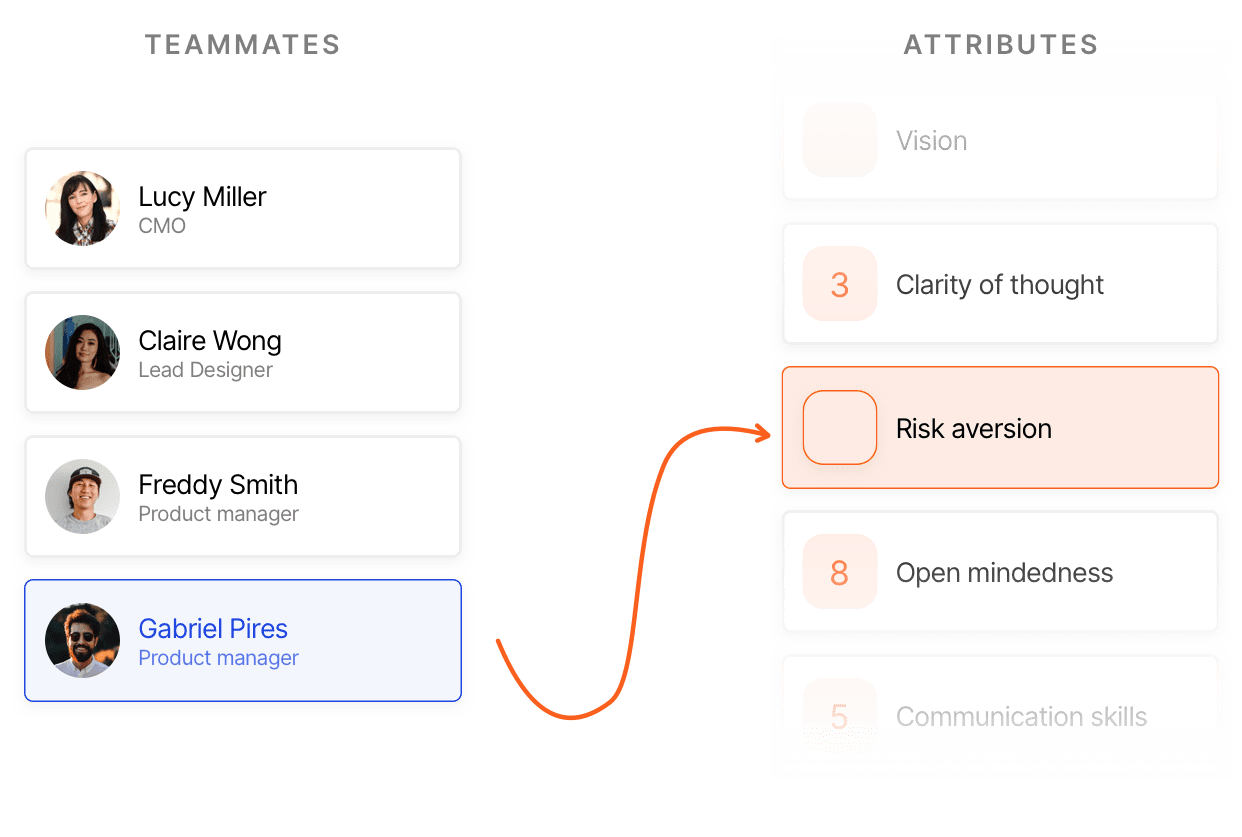 2
Once an outline is created, the portrait of that teammate is created
In this case, Claire has received outlines for truthfulness from her teammates. These outlines are averaged, so her team decided collectively that she's scoring 9 in truthfulness.

The more votes there are, the more complete Claire's portrait is. 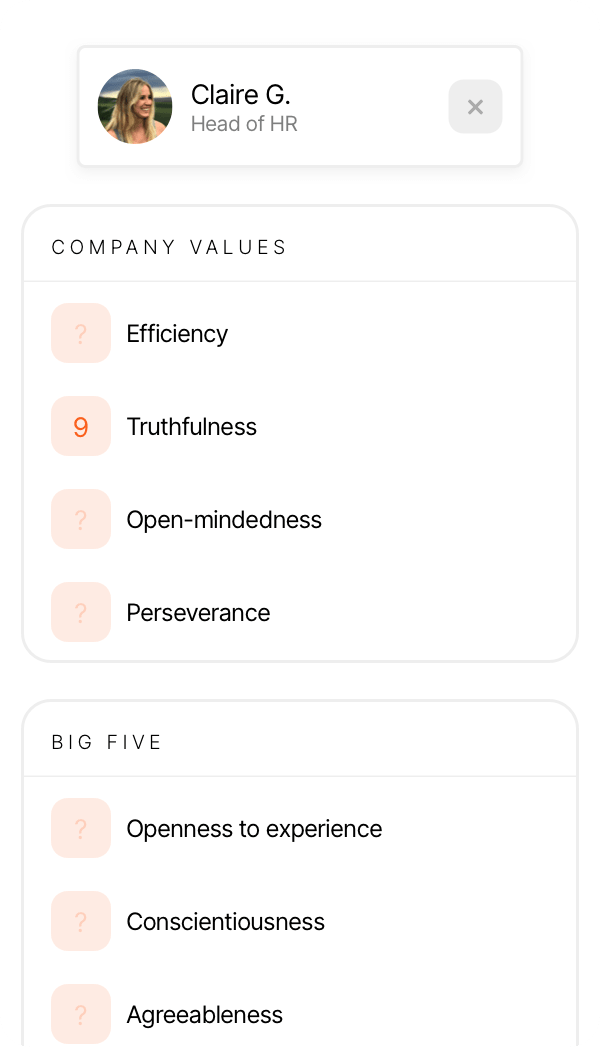 3
In time, every teammate's portrait is updated
As time goes by, your team will have opportunities to complete Claire's portrait.

But at the same time, everyone is building each other's portrait. And your opinion is one in a sea of many. With Synergy, you can see your perspective, as well as the grand picture. 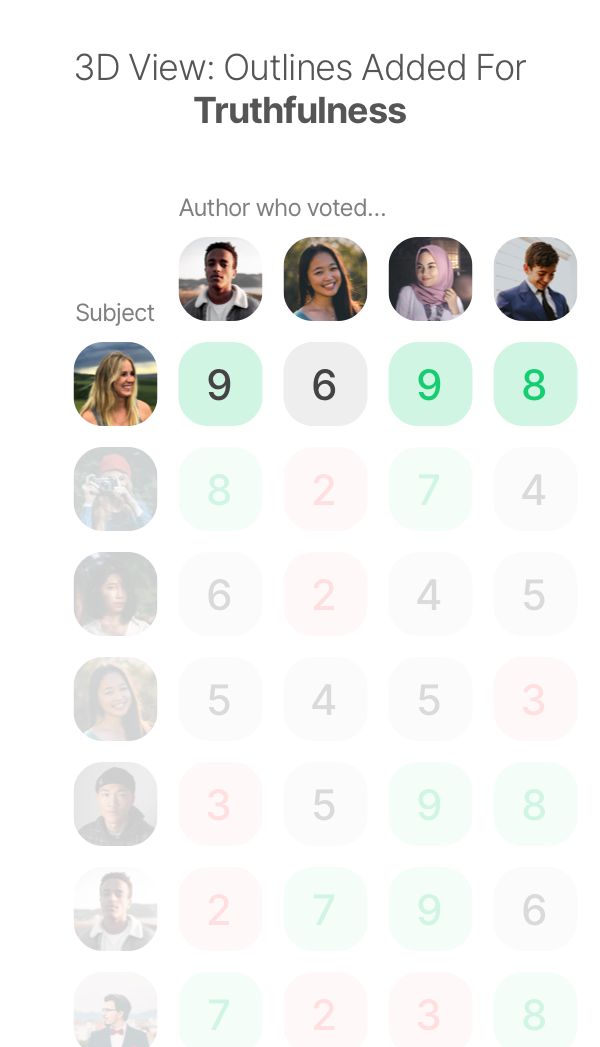 The team leader tells Synergy which attributes are important for that vote: is this problem meant to be better solved by long-term thinkers? Or by calculated, risk-averse people?

By simply selecting a few attributes (which, can be edited, removed or added by leaders), Synergy unlocks a better way to make decisions. 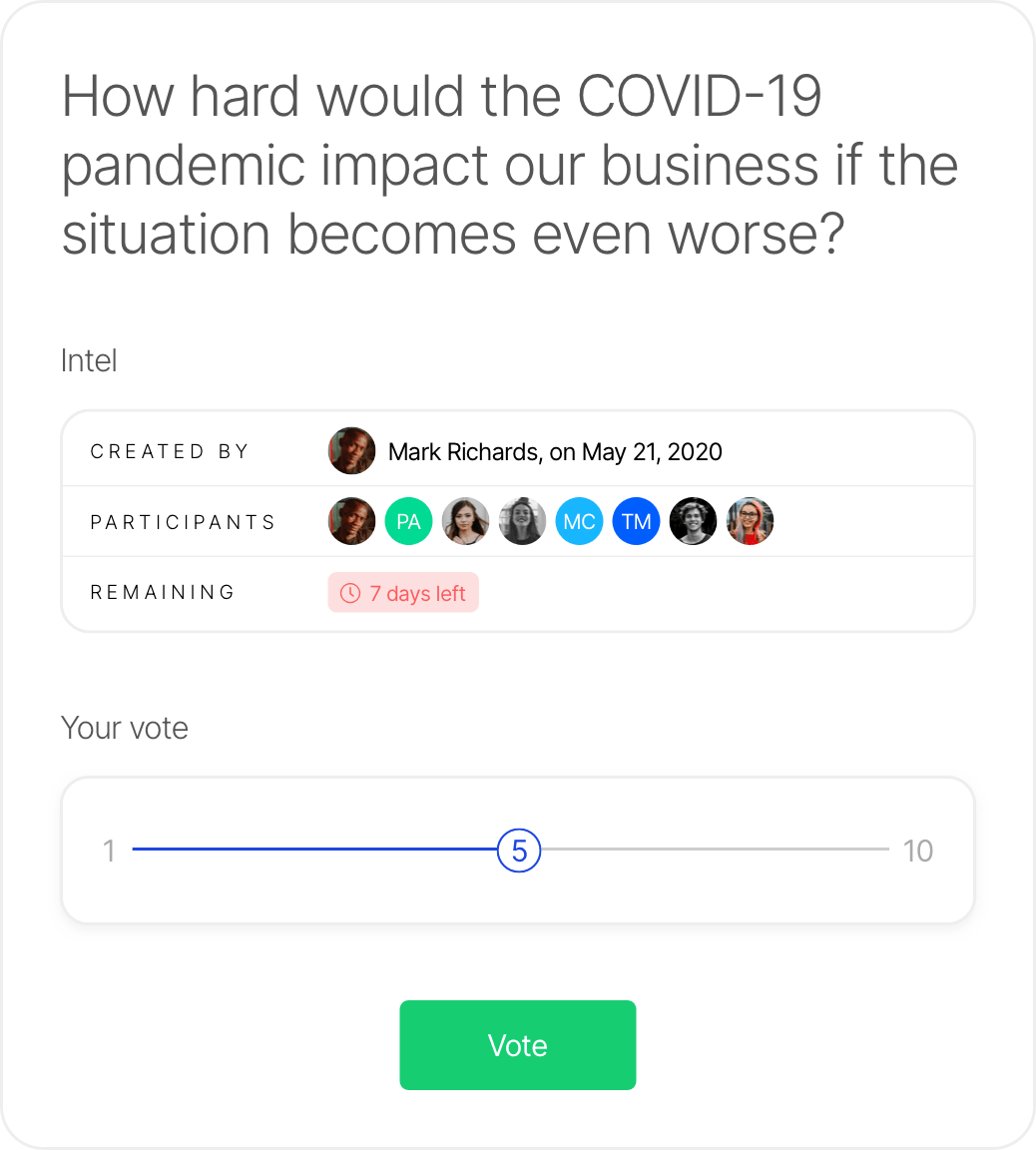 5
At the end of a vote session, Synergy shows two results
Democratic vote 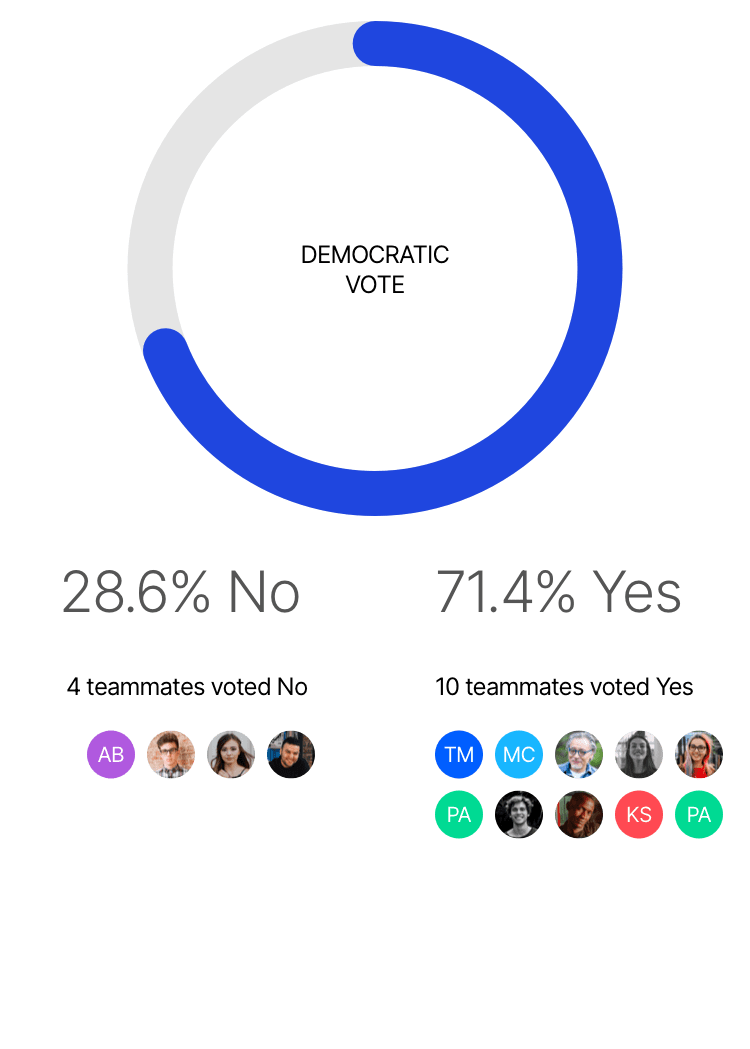 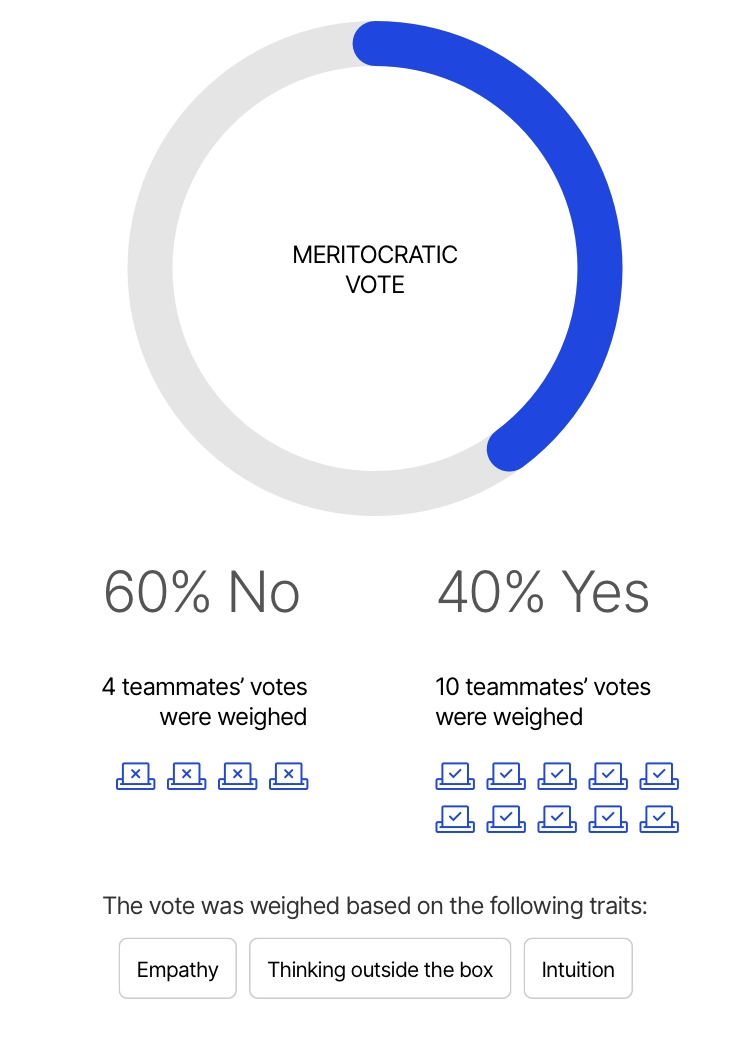 In the democratic vote, all votes are equal. It's the type of vote we're used to.

Through the meritocratic vote, everyone's vote is weighed based on the traits that were selected for the vote session. This way, your company leverages the experts on your team (experts which have been decided by... the team!). Picking empathy as a relevant attribute for this vote means that people scoring high in empathy will have a more important vote. Also, people scoring low in empathy will have a lower weight for this result.

If you hired a visionary person, the democratic vote does not leverage that. Rather, it averages that person's vision with the rest of the team. That's lost potential. Synergy unlocks the wisdom of the crowd for you, allowing you to make better-calculated decisions.
Here are all the other features that come with Synergy
Add written feedback to your outlines

When you add an outline to someone's portrait, you also have the choice of leaving written feedback with either actionable advice or general comments — or not! It's totally optional.
See the big picture with the 3D view 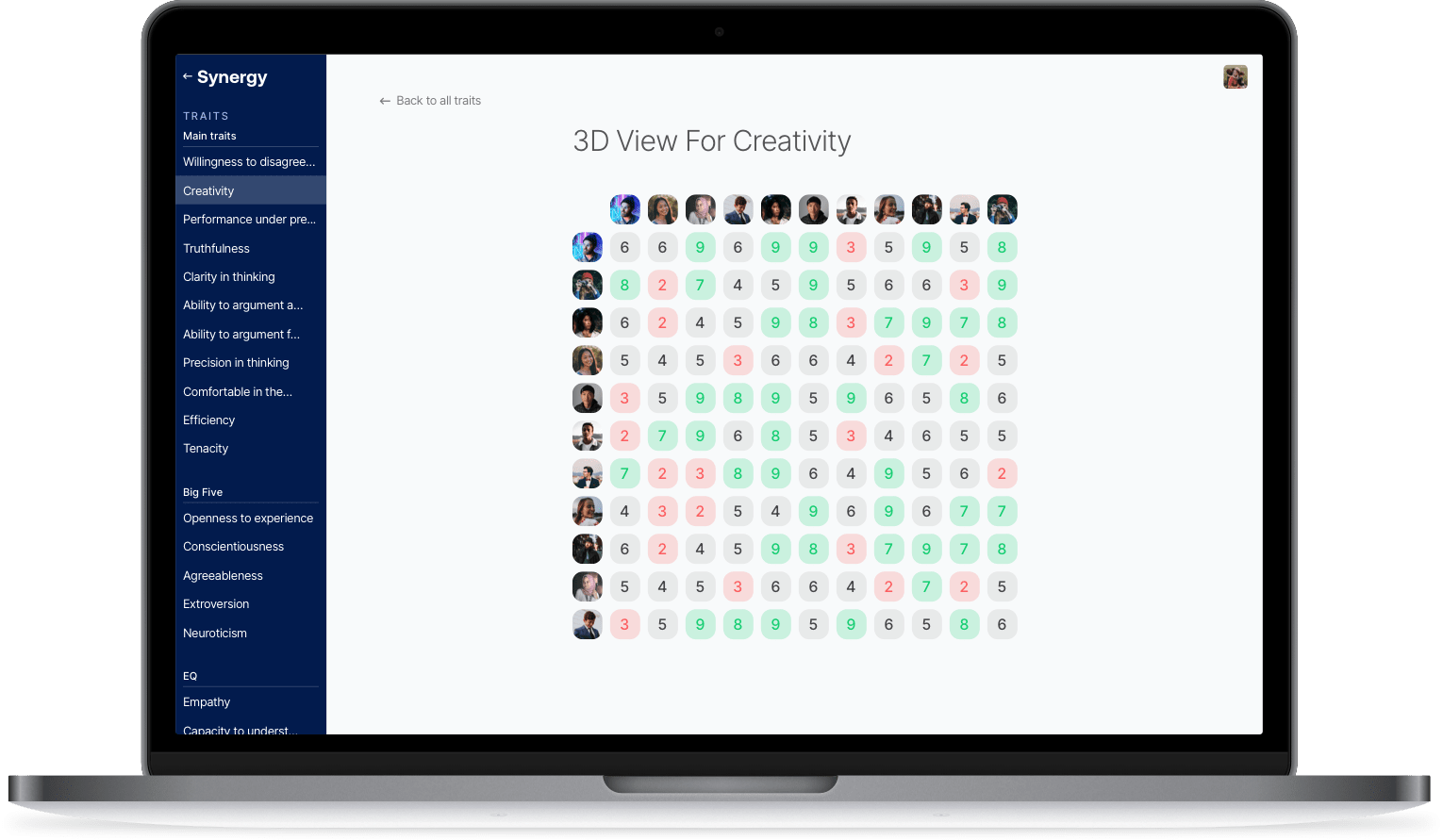 Your opinion is one in the sea of many. When you grade someone, you're seeing in 2D. Through Synergy, there is a way for you to see in 3D. This way, you will see the multitude of opinions, allowing you to see the big picture.
See the team as a whole
All wise companies look at the team as a whole: the sum is greater than the parts.

When teammates outline each other's portraits, they automatically build the portrait of your team: how much empathy is there in your company? Is your team averaging 3/10 or 8/10 on encouragement? What if there's no one on your team that's well calculated?

The team's portrait allows you to see both the forest and the trees. 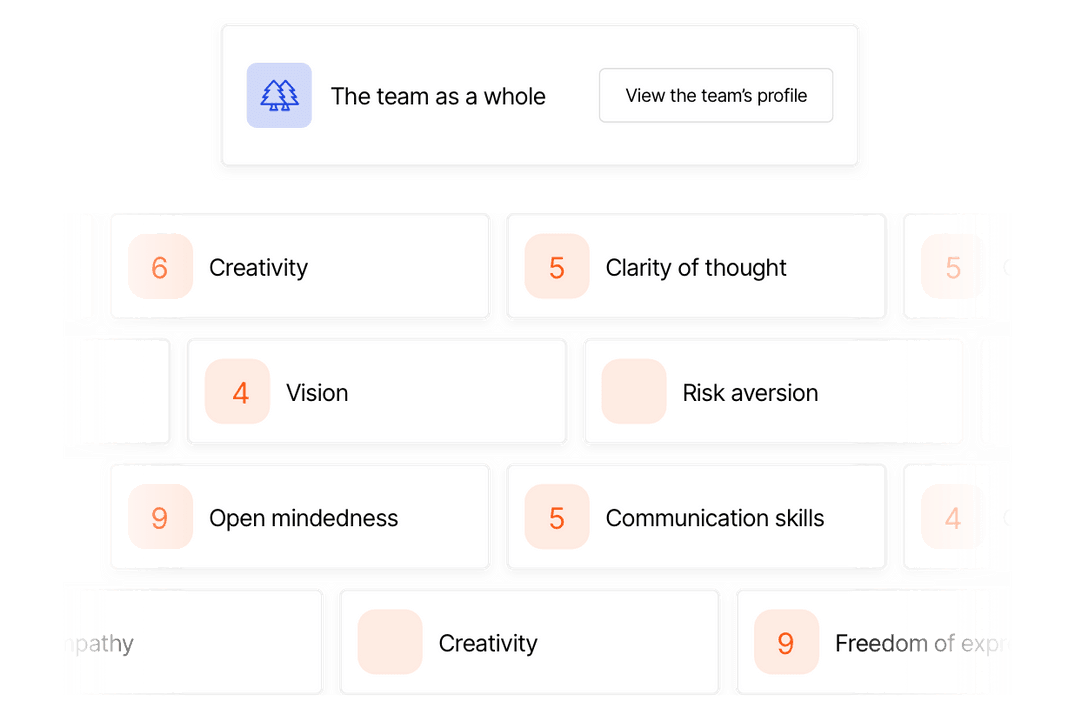 Keep track of transparency
Synergy is built for transparently honest companies. In this kind of team, everyone understands the efficiency of clear communication that has no baggage or politics involved.

Through Synergy, you can see the full history of outlines, along with the feedback left. 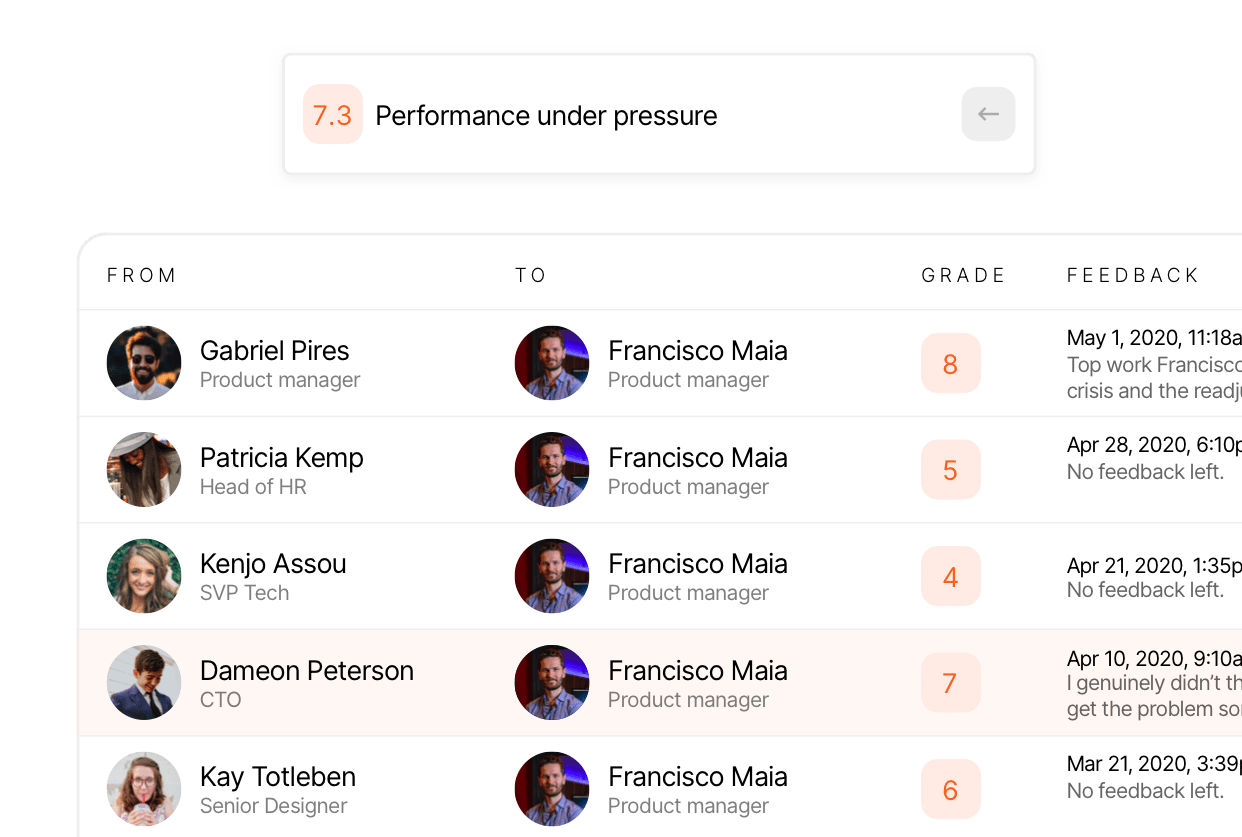 When teams use Synergy, they leverage the peak-performance version of their team
The wisdom's crowd is out there inside your team. It's simply not captured by you. Are you ready to make better-calculated decisions within your team?
I want Synergy

Synergy is a product that is part of the Ch Group.