Don’t Look At $1B+ Companies For Advice. That’s Likely Wrong. 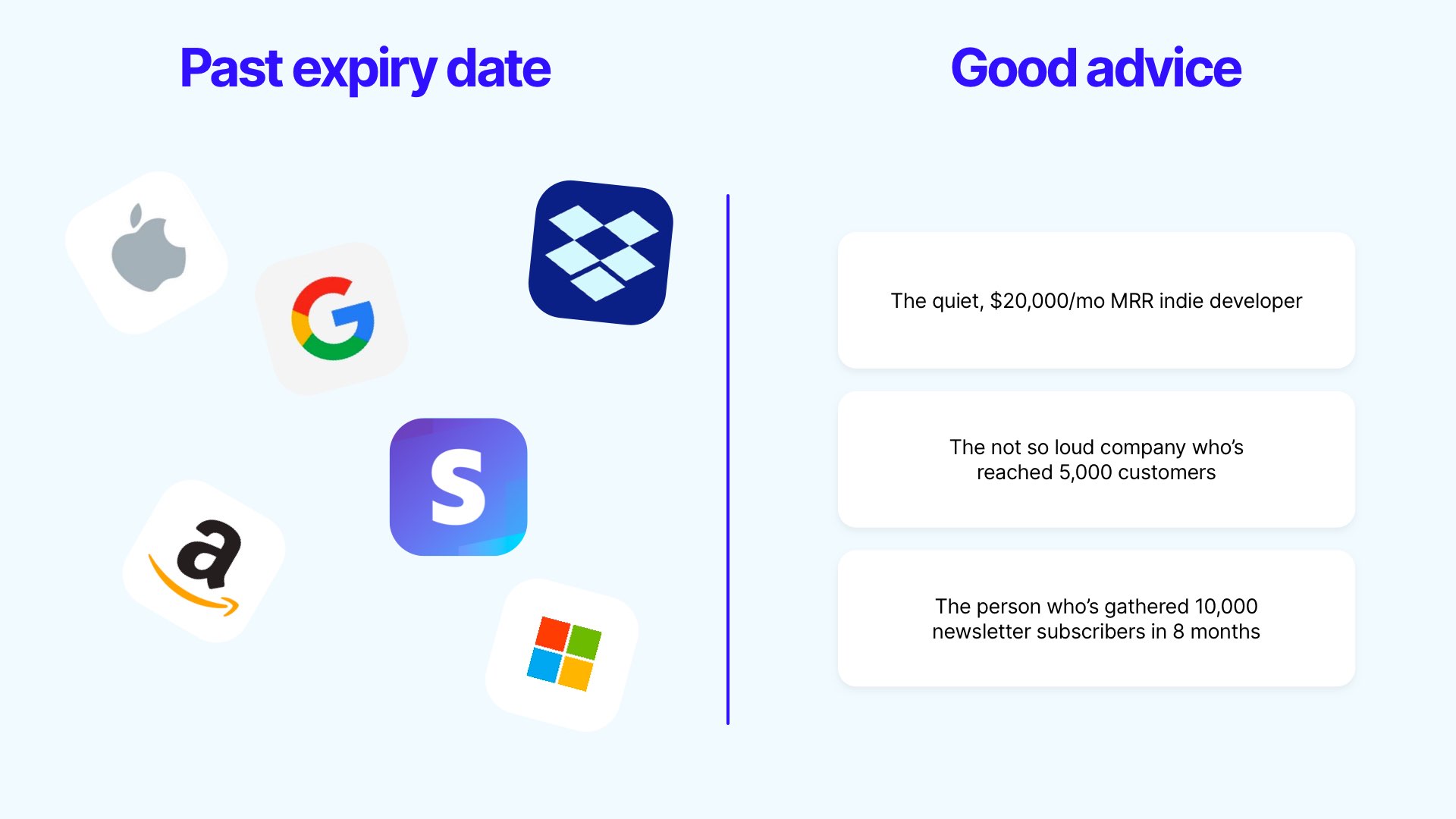 Don’t want to commit to a full read?
Read this essay with Layered Ink

Rather, look at the boring, unshiny group of folks who’ve reached $10,000 in MRR after 6 months.

And which have less than 50 score points in GTMetrix, Lighthouse or whatever.

There’s more to learn from them (since they’ve got $10k in MRR) than from Apple or Stripe.

Advice has got an expiry date

Us hackers — product people, designers, developers and engineers — like to look at the likes of Microsoft, Apple and what have you, and draw lessons from them. We might go to their website and say “Look, they’re making it this way. So I should do it too!”

It’s human to learn by assimilation (which is just a fancy way of saying copying and adapting to your case): after all, it’s how we learn how to talk, walk and comport ourselves in society.

The underlying set of assumptions is:

The thing is, you already know it: if a friend would come to you with this set of thinking, clearly articulated into words, you’d dismiss them. You’d blurt out some other advice you’ve heard, which is: “You’re not Microsoft’s size, so what works for them maybe won’t work for you.”

I’m saying “clearly articulated into words” because that’s the gist of the problem:

When we think, we take shortcuts.

A → B → C can have some missing links in-between, when we think about it — and we’ll accept them as true. But if we put it down on paper (or into words), we’ll be quicker to notice these gaps in thinking

I think a perfect example is what I’m sure has happened to you before: you’ve woken up from a dream and you realize that the world which you were dreaming didn’t make sense. Something was an aberration — something happened that shouldn’t have happened (say: people ran naked in the public square). Only after you woke up and re-played your dream in your mind you were able to spot these aberrations.

And then you ask yourself “How did I not notice that people were running naked in the public square and no one had a problem with that?” — wild dreams, I know.

But you just say to yourself “Welp, that was a dream. In dreams, some weird stuff is just taken for granted.”

It’s the same sort of thing here as well: if in your head drawing inspiration from Microsoft’s website makes sense roughly, you’ll jump to the conclusion without putting it into words.

And of course, I cannot claim to have figured it out by diminishing the situation to just this. Many other factors are contributing when we’re falling into this trap of following Microsoft/another big company:

So to put it in black and white, the bottom line is this: we’re looking at Microsoft or another big company (or the wrong company, if you were looking at WeWork last year) and drawing the wrong conclusions.

You’d be better off looking at Microsoft’s first year of business, if you’re just about to launch your SaaS product or whatever product.

But now that I put it this way, you can see how that doesn’t make sense at all. Microsoft’s first year of business was 1975. 1975 was a totally different world than 2020.

So? What’s the conclusion? Well here’s a tough one:

Looking at big companies today might be more of a hindrance than a help. Instead, look for young companies that are, at least for the moment, on a good trajectory.

Look at the startup which has “blown up overnight” but which is not older than 2 years. That will tell you something about timing in that industry.

Look at the person who built an email list of 10,000 in 6 months, if that’s what you’re looking to build.

Look at the pitch deck of the company who raised $100 Billion in 2 days, if that’s what you need at the moment.

And even that will not tell you everything about the full picture — read about the founders as well and their past history.

None of these examples will give you the perfectly-shaped lesson. Maybe the person who’s reached $20,000 in MRR in 3 months has built an email list of 100,000 people over the last 10 years. You never get the full picture, but that’s a fact. However, as opposed to looking at Apple’s website today and presenting your product in the way they present theirs — it gives you better chances.

Who to not look at

Don’t look at the unicorn if you’re not ready to go on ultra-gambling mode on a game that’s already considered gambling: entrepreneurship. AirBnB was the shit for the last years. These days their revenue is halved.

Does that mean AirBnB is bad? Or a bad business? No, it just means they played a highly-risky game and it was well, until it was not. It was high-growth and exuberance and “the hottest startup on the block”, until the pandemic hit and the travel industry was hit.

What’s the point I’m making? Most people looked at Airbnb instead of a business which was more solid, without taking into account that it’s a high-stakes game.

Don’t look at the company that’s been in business for 15 years for short-term advice. Sure, look at their principles and their long-term thinking: thinking that applies to day 1 and day 5,000.

Look at the people that are closest to your position right now.

And yes, even they haven’t figured it out.

I’m Ch Daniel and I founded the CH Group. I’m aiming to build the first family-owned SaaS group. That’s a company that holds a conglomerate of SaaS companies. It’s part of my philosophy: instead of a convoluted product, you’re better off with a group of unique, separate, focused products.

See everything I do here, or, if you want to hear more from the CH Group, subscribe in the footer.